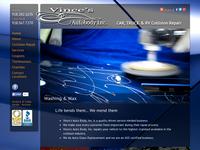 Vince Lansink opened Vince's Auto Body in Sedona on Shelby Drive in 1986. Jim Bachler, having worked with Vince at a prior Auto Body repair facility at the age of 18, followed him and began working as a body and paint technician. Jim became the General Manager in 1993, and on January 1, 2004 Jim and Dawn Bachler bought the business. Vince's Auto Body has been an active part of the community for over 25 years. We believe in providing you with a vehicle repaired to its highest standards in order to make sure your family is safe.