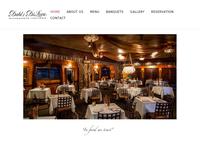 Within the first year of opening, in 1995, Dahl & Di Luca Ristorante Italiano, the food critic of the Phoenix New Times stated, Sedonas red rocks knock you out during the day look for Dahl & Di Luca to knock you out after the sun goes down! In 2012 AAA Inspectors selected Dahl & Di Luca in the top 5 most romantic restaurants in the nation and continued our Three Diamond rating. Since then the award and accolades have exceeded any reasonable expectation. The cuisine and wine list is award winning and after 18 years, continues to surprise and satisfy our guests.